I recorded a two-part (only because I accidentally stopped recording part way through – haha) “Worm Inn Overfeeding Challenge” update yesterday. Two more weeks have gone by, and once again I’ve been leaving the system unfed – this time primarily due to the fact that I wanted to start harvesting some worm compost. Letting a system sit (without feeding) for a period of time before harvesting is never a bad idea since the worms can then process more of the material for you. Plus, it can help to reduce the amount of moisture in the compost (assuming it’s an “open” system).

As I mention in the first video, the system was actually starting to head toward “sour” conditions a short time after the last feeding. I started noticing a familiar sharp, tangy smell (some of you may recall my experience with a sour Euro bin a while back – “From Bad to Worse – Sour Worm Bin Decline“), the appearance of more white mites and white worms, and a reduction in the number of worms in the upper zone (where the most recent food was). I’ve been adding a lot of acidic stuff, and I certainly haven’t been holding back on the amount of waste being added in general, so I can’t say I was overly surprised.

In an effort to restore some eco-balance, I decided to add some nice aged manure and some “compost ecosystem” material in the upper zone. Something like aged leaf litter would work very well also. Something I WOULDN’T recommend is adding a bunch of lime to try and increase the pH – you’ll likely just end up shocking the system and making matters worse. As expected, the materials I added really seemed to help restore some balance in the system, and I no longer noticed the strong “sour” odors when digging around.

Now, the BIG question of course, was whether or not the worm compost harvested from the bottom was going to be any good. I have been adding a LOT of waste to this system, and while it’s certainly looked as though the worms have been doing a great job with it – it’s been hard to say for sure. Well, the good news is that the material coming out the other end is beautiful, rich stuff – nothing like the stinky sludge I’ve grown accustomed to with some of my enclosed plastic bins. I was also really impressed with the absence of worms and cocoons in it. After I finished shooting the second video I continued to scrape more down into my container until I started seeing a few adult worms falling down (these were easily removed and put back to work). I’m pretty sure there is still a lot more good stuff that could be harvested (with a few more worms likely needing to be picked out) but I’ll leave it for the time being. In an upcoming video you will see how I put the material to good use right away.
8)

Red Worm on My Window

This morning when I was about to toss some garbage into the can out on my deck, I encountered a rather bizarre situation! A Red Worm was literally climbing up the outside of my deck door! I’ve seen a lot of weird things in my years of vermicomposting, but this might take the cake!

I know other species, such as Blue Worms (Perionyx excavatus) and African Nightcrawlers (Eudrilus eugeniae) are known for their crazy roaming (especially during really rainy conditions) – some literally being found in the tops of trees and tall buildings – but I’ve never encountered anything like this with Red Worms. They certainly like to be ‘out and about’ a bit during really rainy dark days – but climbing tall buildings (with a single wiggle? haha) is definitely a bit different.

I was half expecting to see a seething mass of worms from my outdoor windrows crawling up my fence and/or out over the sidewalk, but I actually encountered very few other Reds out. Interestingly enough, I DID find a couple more on the same door when I opened it and looked around.

As a way to celebrate this unique occurrence, I decided to write a little ditty…

Thank ya…thank ya very much!
8)

Here are some good questions from Jessica:

During a particularly wet out-of-balance period, a large
amount of leachate collected in the base of my flow through worm bin.
From other posts I understand that the problem with “feeding” this
stuff to plants is that it is potentially anaerobic and full of foul
things. What I’m wondering is does it still contain nutrients? If so,
how can we safely recoup them? In particularly I’m wondering about
aerating the leachate? For example, with an electric (e.g. aquarium)
aerating? Or, with hydrogen peroxide? The latter seems to be a less
messy solution and (from what little I’ve read) seems like a viable
solution. Thanks.

Hi Jessica,
Leachate definitely contains nutrients, and in fact there are many people who swear by it as a plant fertilizer. I personally prefer to be somewhat more cautious myself, since as you’ve pointed out, it can indeed be “full of foul things” (love how you put that – haha)! Anaerobic conditions can result in the creation of phytotoxic (plant harming) compounds such as alcohols etc, so you can end up with some less-than-inspiring results if you do choose to use the liquid as-is! If simply pouring the stuff onto outdoor beds, you may not notice any negative effects, especially if you have a nice rich soil – but there would likely be a greater chance of negative repercussions when adding to potted plants.

I generally recommend that people aerate and dilute leachate (preferably with rain water) before using it. Even just pouring in the water in (then perhaps pouring all of it from one container to another) would likely help to add quite a bit of oxygen and get things headed in the right direction. Use of an aquarium pump would certainly do the trick as well.

I definitely WOULDN’T recommend adding hydrogen peroxide however since this will kill off most/all of microbes in the liquid, and potentially even those in the soil you end up adding the liquid to. I suppose that if you didn’t add TOO much at once (i.e. just enough to oxygenate and kill off anaerobic microbes) the liquid could still provide immediate nutrient value and perhaps longer term nutrient release in the form of the dead microbial biomass (being munched on by the “good guys” in your soil). Just not sure how you would find that “perfect” amount. 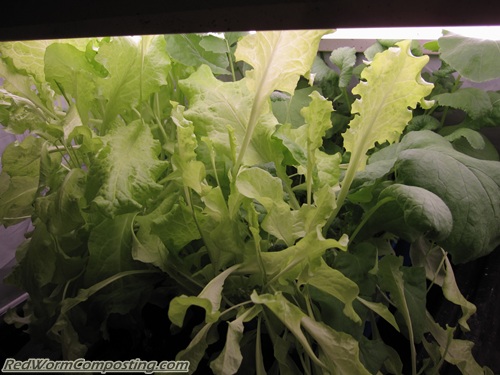 Late last week I decided to pull the plug on my “Mini Vermiponics System” experiment. My original goal wasn’t so much to grow a nice crop of plants as it was to simply see how well the process worked in general. All in all, I was very pleased with the results! Considering this was my first attempt at this sort of thing, and that the conditions (low light, cool temps) weren’t exactly optimal for serious plant growth, I think we ended up with a nice little plot of vegetation!
🙂

Of course, one of the MAIN things I wanted to determine was how well the worms did in a system like this. Given some of the issues I ran into with really foul reservoir water (due to low oxygen), I was a little concerned that the grow bed environment might have ended up being rather inhospitable for the worms. Digging around a bit from time to time (and not really seeing all that many worms) seemed to contribute to this worry.

Well, the good news is that the worms did just fine (to say the least)! The first indicator of success in this department was the dense population of Red Worms I found in the feeding container. 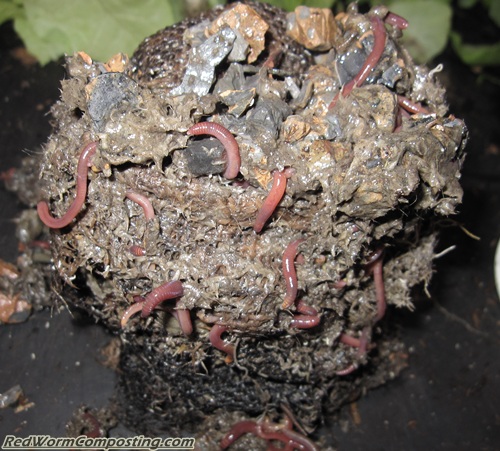 I suspected that if there would be a decent number of worms to be found anywhere, THIS would be the spot, and that hunch turned out to be correct. The burlap bag definitely didn’t turn out to be the best choice as far as a removable insert goes, but if you used some sort of plastic mesh bag instead, this MIGHT even offer a decent way to harvest worms from a vermiponics grow bed!

Once I had dumped (and surveyed the contents of) the feeding tube, I decided it was time to dump all the grow bed media into one of my black worm sorting trays so I could assess the worm population in the rest of the bed. As I discovered, there were loads of worms down in the really wet zones – and they seemed to be especially concentrated in the lint material. 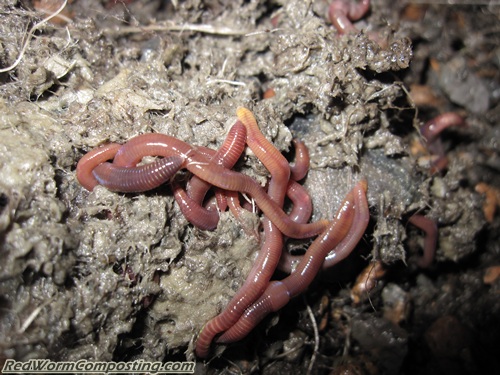 I wanted to really get a sense for just how many worms I might have ended up with in total, so I next started to slowly remove gravel and other materials from the top, encouraging the worms to keep diving down. This process actually took place over several days, and on Monday of this week I decided to shoot a video to show the worms I found down in the bottom.

Given how few worms were added to the bed in the first place, I was pleasantly surprised with the final tally (which, by the way, wasn’t really assessed, apart from some “wow – that looks like a decent amount” observations – haha). This reminds me – I definitely need to find a new home for all those little guys, since they are still sitting in that gravel as I write this.

Worms certainly weren’t the only thing to be found in great abundance in the grow bed. As I mention in the video, I couldn’t believe how many cocoons I found! It was incredible!
If only I had been doing this around the time I set up some of my “50 Cocoon Challenge” experiments! It would have taken a few minutes to get my quota!
🙂 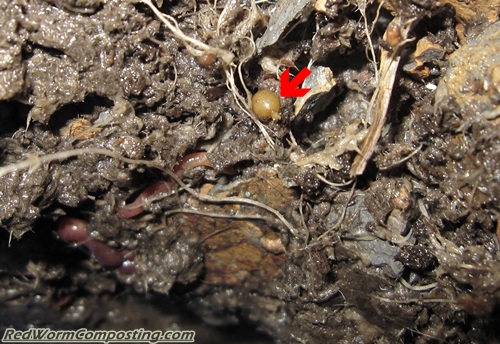 Anyway – I am really looking forward to setting up a much more serious system outside in a month or two. I am planning to use a large plastic garbage can as a reservoir, and may even add a goldfish or two to keep things interesting!