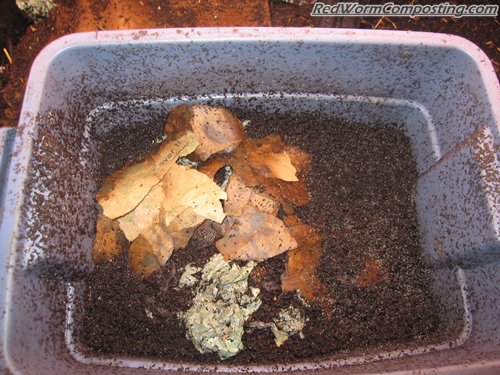 It’s been a couple of months since my last ‘Dryer Lint Worm Bin’ update and I decided today that the experiment has basically run its course, so this will be the “wrap-up” post.

It has been an interesting experiment, although, as is often the case, I feel like I need to do some more experimentation with dryer lint as a worm bin bedding in order to feel comfortable making any firm conclusions.

In general, the population of worms in this tiny bin seems to have done very well. I don’t have much free time these days so I can’t do an actual population assessment, but all looks great based on the number of worms I saw in the material today. This is especially impressive given how little I added to the bin in the way of food, and how anaerobic I allowed it to become.

Speaking of which, it is also hard to say for sure how quickly this bedding material will break down in comparison to typical bedding materials, such as shredded cardboard, simply because there was not enough oxygenation going on throughout most of the bin. What I would like (and am tentatively planning) to do is incorporate some dryer lint into a future worm composting system with much greater air flow. I think the BOM-6000 system I’ll be using for my upcoming “Four Worm Reproduction Experiment” (Part Deux) might be the perfect one to test out.

Even the wet, stinky undecomposed lint seemed to be an attractive habitat for the worms (in the dryer lint bin) so I’m optimistic that this material will work well in a better quality worm composting environment.

I’d be interested to hear back from anyone else who might have tried dryer lint and/or pet hair etc in their worm composting systems, and as per usual, welcome any and all comments about the topic in general.