As it turns out, the beautiful “homemade manure” mix I brought inside to use as food/habit material in my Worm Inn – along with various other systems (including VB48) – was absolutely loaded with Stable Fly larvae. Let’s just say it’s been an interesting few weeks! lol

For those of you who are unfamiliar with Stable Flies, they are basically biting house flies (whoohoo!). It is very common to find the larvae, and pupal capsules in horse manure, but they don’t seem to be nearly as interested in ‘regular’ waste materials, such as kitchen scraps etc – and thank goodness for that.

What’s really cool, though, is that the Worm Inn is the ONE system that actually kept the flies contained! So, all I had to do when I finally decided to get rid of them (today) was turn on the vacuum, unzip the lid a little and put in the end of the hose.

As you might guess, neither the Worm Inn nor the plastic bin have received any additional food materials since my last update. In both systems the zucchini slices, and even the recently-added bedding materials had, by this morning, become very well processed.

That being said, I have actually decided to discontinue using the plastic bin. In all honesty I think this project has kinda run its course by this point. The habitat value of the material in the plastic bin was not great (even with the recent improvements), and there was no longer all that much room for expansion. Unlike the material in the Worm Inn which becomes greatly reduced in volume due to highly aerobic conditions, materials tend to pile up in a plastic bin system a lot more over time.

That’s not to say I haven’t been impressed with this system though. The population of worms in the bin was absolutely incredible. That’s actually part of the reason I wanted to (and did) empty it into my VB48. It was definitely getting to the point of being really overcrowded. Apart from just generally seeing countless worms when digging through the material, I was also finding lots of worms crawling up the sides and on underside of lid.

I was also fairly impressed with the processing “power” of the bin system. Apart from some layers of newsprint down at the bottom (see picture below), most of the food and bedding I added did end up surprisingly well-processed. I think it’s safe to say that large air holes (in lid and sides), and the relatively infrequent feeding played a big role in this, but it’s still pretty cool. 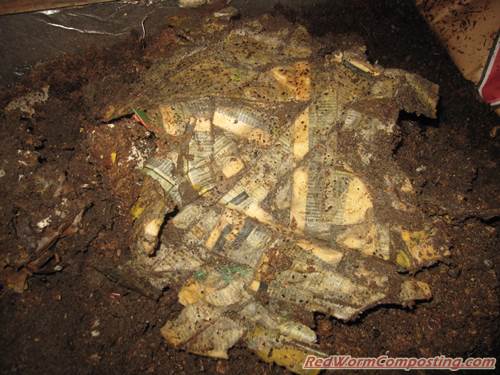 Just so you know I will continue to use the Worm Inn – simply creating new posts in my “Worm Inn Journal” series. The one nice thing about moving on from this project is that I can now basically add whatever kind of food material I want, so I suspect the Inn will be getting fed more often moving forward.